Its that time again! The Salem Republican Committee is proud to welcome you once again to our Annual Olde Salem Days Breakfast at 8am on September 14th at the Salem Civic Center! We hope you will join us for some amazing food and amazing company, and don’t forget to bring your friends and family.

We hope to see you there! 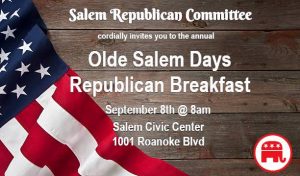 Come out and join the Salem Republican Committee for the annual Olde Salem Days Republican Breakfast on September 8th at 8am. Aside from amazing food and conversation, you’ll get to hear from elected guest speakers and Republican leaders fighting to keep Virginia strong! Your support also helps us keep fighting for Republican principles in Salem and the surrounding areas.

And Don’t Forget To Register Your Seats At: https://docs.google.com/forms/d/e/1FAIpQLSe9LXq6GC8WckUttGX9CjG0AYkWxc-1NFtS0pzrJwTPZ8vFJQ/viewform

We hope to see you there!

As Chairman of the Salem City Republican Committee and pursuant to the Plan of Organization and as recommended and directed by the Committee, I, Jesse T. Lynch, do hereby issue this call for a Mass Meeting to be held at 6:30 pm local time on Monday, May 1, 2017 at the Salem Civic Center for the purpose of nominating Republican candidates for the offices of Commissioner of the Revenue, Commonwealth Attorney, Sheriff, and Treasurer to be voted for the in the general election on November 7, 2017.

All legal and qualified voters under the laws of the Commonwealth of Virginia, regardless of race, religion, national origin or sex, who are in accord with the principles of the Republican Party and who, if requested, express in open meeting either orally or in writing as may be required, their intent to support all of its nominees for public office in the ensuing election, may participate as members of the Republican Party of Virginia in its mass meetings, party canvasses, conventions or primaries encompassing their respective election districts.

A voter who, subsequent to making a statement of intent, publicly supports a candidate in opposition to a Republican nominee shall not be qualified for participation in party actions for a period of four years.

Candidates for nomination shall include a check to the Salem City Republican Committee for the full mass meeting filing fee when they submit their written statement.

A full copy of this Call shall be posted on the Salem City Republican Committee website (www.SalemRepublicans.com) and the requirement that it otherwise be published in a newspaper is waived pursuant to Article VIII, Section A(2) of the Plan of Organization of the Republican Party of Virginia.

The official filing form is attached to this Call. (Click here for a printable version)

If no candidate properly files for any office then the mass meeting will be canceled.

For more information, please contact Chairman Jesse Lynch at 540-521-5244 or by email at jesselynch39@gmail.com.

To schedule a time to deliver a completed official filing form and a filing fee check, please contact Jesse Lynch at jesselynch39@gmail.com or (540) 521-5244

February 4, 2016 – Richmond, VA – The Republican Party of Virginia’s (RPV) issued the following statement following the Virginia State Board of Election’s decision to support our request to rescind the Statement of Affiliation:

“With the conversation about the Statement of Affiliation behind us, we can fully turn our attention to the pressing matter at hand: the March 1 GOP Primary,” said RPV Chairman John Whitbeck. “RPV is pleased that the State Board of Elections voted to rescind the Statement of Affiliation and we look forward to record turnout and tremendous enthusiasm for our candidates come Super Tuesday.”

The Salem Republican Committee is looking to build upon interest in this year’s presidential election. Historically, local political committees endure a decline in membership and interest during the “off” years between major elections, and Salem is no exception. With the wide variety of candidates seeking the Republican Party nomination this year, and Virginia’s role as a swing state, interest in the Republican Party is beginning to surge to its four-year peak.

“Last year was what we would call an ‘off-off’ year with no Presidential or state-wide elections. The committee activity and membership is typically at its lowest during those years,” explained Stuart Bain, the current chair of the Salem Republican Committee. “What we are hoping to see is a groundswell of interest in the Republican Party to help ensure a victory in November, but it all starts with electing Committee members and a new Committee Chair at our February 18th mass meeting.”

Registered Salem voters interested in the Mass Meeting, joining the Committee, running for Salem City Council as the Republican nominee, or attending the Republican conventions as delegates have until noon on February 10th, 2016 to pre-file. The Official Call and registration forms for the mass meeting are available on the Committee website at https://salemrepublicans.com/.